Defibrillation is the procedure where a Defibrillator machine delivers a high energy electric shock to the patient’s heart in order to normalize the heartbeat function. Defibrillator machine, with the help its computerized system, can identify itself that whether it’s one of few types of life-threatening arrhythmias which could result in death caused by the sudden cardiac disorder. And whenever applicable, a defibrillator device would deliver a high energy charge to reestablish proper management of the heartbeat. This sophisticated device has a smart electronic chip, which is very accurate in the identification of the real cause of the cardiac arrest by filtering out circumstantial noise and other factors and by detecting the electrocardiogram signal to make an instant decision whether the patient is shockable or non-shockable. This fast and accurate self-detection is the main feature of these devices which enables even untrained layman to perform the defibrillation process.

AHA guideline and the related data 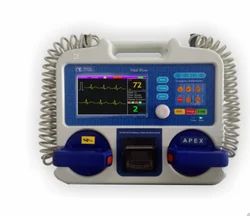 AHA (American Heart Association) has released a guideline to follow in case of sudden cardiac arrest in public interest. They recommend the use of an automatic defibrillator device to reverse the disorder caused by ventricular fibrillation or ventricular tachycardia. Both are fatal conditions and often lead to death due to the lack of a rescuer who can perform the defibrillation procedure or lack of defibrillator machine itself. In more than two-thirds of such cardiac arrest cases, patients do not survive, as per a recent survey conducted by AHA. It is found that more than 60% of such cases are witnessed by a rescuer, yet more than 95% of patients did not survive – because they either the rescuer wasn’t able to find a defibrillator machine nearby, or was not sure how to use the one, despite its user-friendly operating procedure, AHA said. That proves general awareness and presence of this defibrillator device in all public places is still lacking and we have far to go to reach our goal.

The survival of a patient in case of SCA (sudden cardiac arrest) is reversely proportionate to the time between the moment of arrest and the defibrillation charge to the heart. The more time passes, the less victim survives. Each extra minute without defibrillation decrease the survival chance by 10 percent. And it has been established that if a victim receives that lifesaving shock within the very first minute of his/her attack, the survival rate becomes 90%. Therefore, it is advised to all the cardiac patients and to the people who have a cardiac patient in their home or neighborhood, that they should buy a device and keep it handy and they would probably save a fortunate soul in the time of need.

In the communities, where such automated external defibrillator devices are placed in strategically common places (where people would find them easily), survival rates in SCA victims improved already. A nationwide survey has been done and according to that, the SCA survival rate reached an all-time high – almost 50%. Recently there has been an influx of such devices in many communities, hence we can conclude that awareness in people is increasing. Though, as we have said it earlier, we are still far away from the out target.